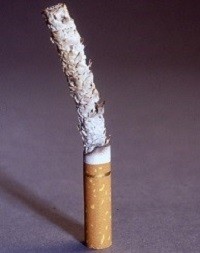 “A Meta-Analytic Comparison of the Effectiveness of Smoking Cessation Methods” Viswesvaran and Schmidt, Journal of Applied Psychology, 1992, Vol 77, No. 4 534-561.

We all know the dangers of tobacco – the increased likelihood of horrible illnesses and potentially fatal diseases, but many people have reported additional benefits after treatment such as

. . . along with the obvious advantages of having more money in their pockets, being free of the smell of cigarettes and not having to stand outside in the British weather leaving everyone else enjoying themselves inside in the warm!

This individually-tailored Stop Smoking treatment was devised by Helen Lesser and has been taught to many other hypnotherapists across the UK so that they are able to help their own clients to simply and easily become non-smokers.

The aim is to enable you to become a Non-Smoker rather than an ex-smoker.

This ‘two-pronged’ treatment addresses both the habits and the cravings associated with smoking (whether cigarettes, roll-ups, pipe or cigars). This means that the difficulties and worries experienced by people who use other ways to stop smoking do not arise: So, no having to avoid other smokers, no constant thoughts of smoking, no missing out or feeling deprived, no loss of enjoyment, no substitute behaviour or habits – just being a non-smoker.

If there is no craving to smoke and the habits you have developed connected to smoking no longer exist, then there is nothing to fight against. In other words, if you do not WANT a cigarette and there is nothing causing you to NEED to smoke – then you simply don’t smoke!

Most people can be helped to be a non-smoker in just one 60-minute session.

Obviously no person, no therapy, no treatment of any kind can ever offer a cast-iron guarantee, however, with this individually tailored treatment and following After-Care Service, we can provide the next best thing:-

If, at any time in the month following the initial Stop-Smoking Treatment:-
you have a cigarette,
think you might,
you want to have one,
are worried you might want one….
then you may come back for additional treatments during the subsequent four weeks – at no extra cost.

Just telephone to request an appointment and you will be offered the first one available.

Please note:- while the vast majority of smokers can benefit from this treatment, it is only at the consultation, with a chance to talk face-to-face, that a decision to proceed can be made.

Use this link for details of fees and booking an appointment with Helen Lesser.

After your last cigarette:-

• Within 20 minutes, blood pressure and pulse return to normal.

• Within 8 hours, circulation improves and oxygen levels in blood return to normal.

• Within 24 hours, carbon monoxide is eliminated from the body .

• Within 48 hours, nicotine is no longer detectable in the body

• Within 3 to 9 months, breathing problems show improvement with lung function increased by 5% to 10%.

• Within 5 years, risk of heart attack falls to about half that of a smoker .

• Within 10 years, risk of lung cancer falls to half that of a smoker .

• Within 10 years, risk of heart attack similar to that of someone who has never smoked.

Risk of developing lung cancer, other cancers, heart disease, stroke and chronic lung disease is reduced – the sooner you stop, the sooner your risk starts going down.

Stopping smoking at any age increases your life expectancy, provided that you stop before the onset of serious disease. Even if you have developed disease, you can benefit from stopping as your body will be under less strain and be able to fight it more easily.

You’ll be less stressed and tired, and physical activity will be easier. Food will taste better and your skin will look younger.

Hearing Loss:- A study published in ‘Tobacco Control’ (from BMJ) invovled 4,000 people in their 50s and 60s and found that the hearing of smokers was significantly poorer than in non-smokers, particularly in the high-frequency ranges. There is some evidence that even second-hand smoke or passive smoking can cause hearing loss.